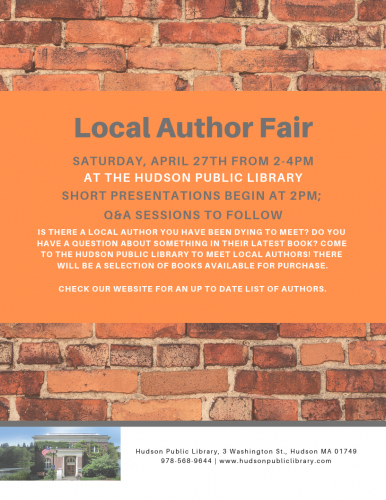 Is there a local author you have been wanting to ask a question about their latest or upcoming book? The Hudson Local Author Fair is a two-hour event for people of all ages to meet and speak with published writers in Massachusetts. Authors are available to mix-and-mingle with the public, sell-and-sign copies of their book, and discuss their work with interested community members.

Authors included fiction writers (children’s, teen and adult), nonfiction writers and those who were self-published. Our goal is connect local readers with local authors. There will be a selection of books available for purchase.

See below for more information about the authors. 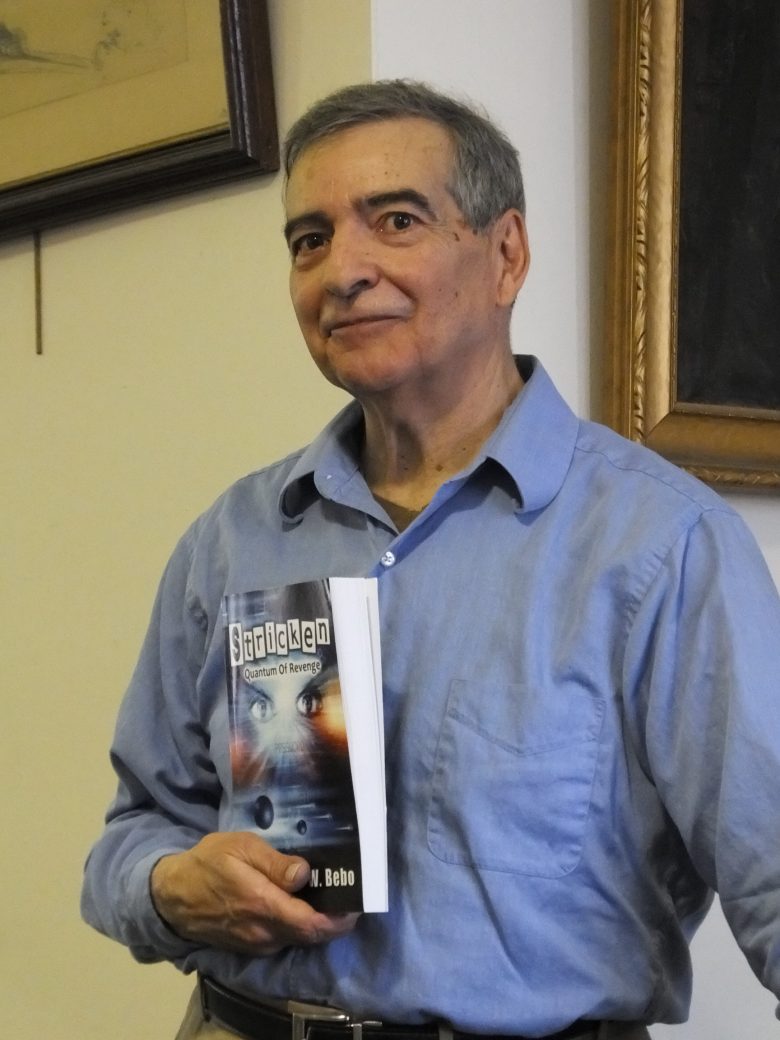 Joseph Bebo is a fiction author out of Hudson, Massachusetts, where he has lived with his wife, Kathy, for the past forty years. He has published nine full-length fiction novels, in a variety of genres, including historical fiction and adventure (Lake, Land, and Liberty, Family Legends – the Charbonneau Letter, The Shot), techno-thrillers with computer and music themes (Stricken, Bach Again, Lamp of the Gods, Altered Realities), and horror, with ghosts and vampires (The Shivering, My Terrible Mistress). He has also written a non-fiction account of his summer playing drums with Van Morrison in 1968. Joe is currently working on a non-fiction book about a Special Needs boy named Alex, who despite his severe disability had an incredibly full and active life. Joe has a Bachelor’s Degree in Music Composition from Berklee College of Music, and a Master’s in Computer Science from Boston University. He loves history and science and has taught both music and the martial arts. 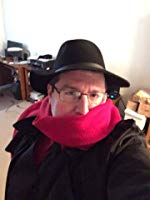 Geoff Bottone is a fiction writer and a small-press games designer. He is working on several works of fiction right now (some short, some long), most of which fall somewhere into the science-fiction, fantasy, or horror genres.  His written works include a short story about a vampire who feeds on fear and the heroic tale of Suzanna who springs into action to save her friend from slavers. In his most recent book, Grïgnyr the Ecordian: A Retelling of The Eye of Argon he set out on a lonely, and perhaps futile, quest to redeem Mr. Theis’ work The Eye of Argon by using its foundation to tell an interesting and fun story. https://www.geoffquest.com/the-words 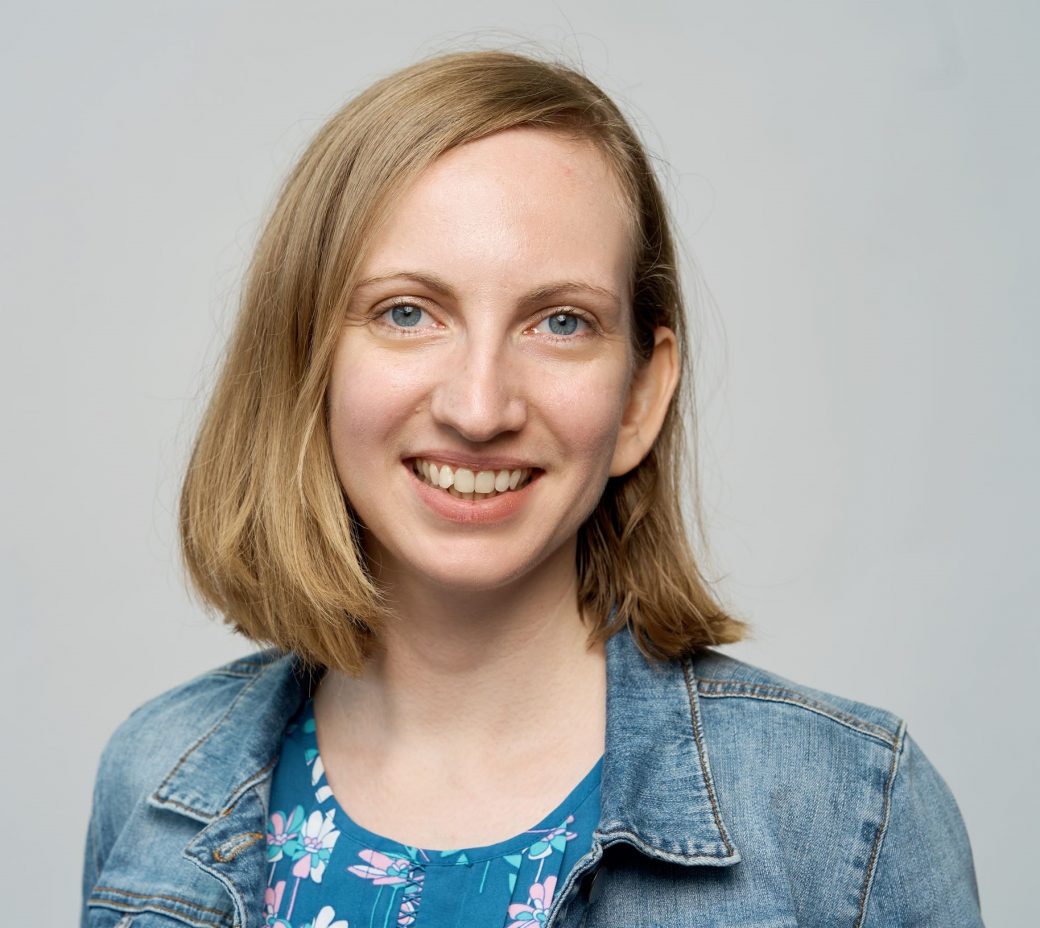 Daphne James Huff is the author of 4 YA novels and a series of royal romance novellas for adults. Daphne works in the non-profit sector during the day and lives in the suburbs of Boston with her husband and son. Get free copies of her romance short stories (both adult and YA) at https://www.daphnejameshuff.com/.

Gledé Browne Kabongo writes gripping psychological thrillers—unflinching tales of deception, secrecy, danger and family. She is the author of the Fearless Series, Swan Deception, Conspiracy of Silence, and Mark of Deceit. Her love affair with books began as a young girl growing up in the Caribbean, where her town library overlooked the Atlantic Ocean. She was trading books and discussing them with neighbors before Book Clubs became popular. Gledé holds a Master’s degree in Communications, and was a featured speaker at the 2016 Boston Book Festival. She leads workshops on publishing and the craft of writing. She lives outside Boston with her husband and two sons. https://www.gledekabongo.com 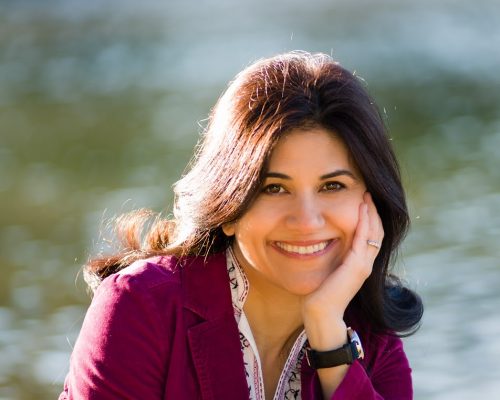 Marjan Kamali’s debut novel Together Tea (EccoBooks/HarperCollins) was a Massachusetts Book Award Finalist, an NPR WBUR Good Read, and a Target Emerging Author Selection. It has been translated into several languages and was recently adapted for the stage. Marjan graduated from U.C. Berkeley and earned an MBA from Columbia University and an MFA from NYU. Her work has also been broadcast on BBC Radio 4 and published in two anthologies: Tremors and Let Me Tell You Where I’ve Been. She has written essays for The Wall Street Journal and The Los Angeles Review of Books. Marjan grew up in Turkey, Iran, Germany, Kenya and NYC and has spent her adult life in Switzerland, Australia and the U.S. She taught writing at Boston University and is currently an instructor at GrubStreet. An excerpt from her second novel which appeared in Solstice literary magazine was nominated for the Pushcart Prize. This second novel, The Stationery Shop, will be published by Gallery/Simon & Schuster in June 2019.  https://marjankamali.com/ 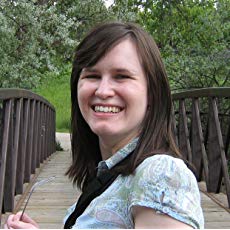 Elizabeth Spencer is the author of several short stories and Justice Unending, a YA steampunk-fantasy novel about Faye Whitlock, a not-particularly-proper young lady who’s possessed by the spirit of an assassin who’s out to bring her country to its knees—and who’s determined to use Faye’s body to do it. Elizabeth writes YA fantasy and steampunk adventures—fast-paced things with a lot of magic, heart, and maybe a ridiculous hat or two. She’s also the author of Fairies, Zombies, and Agent Queries, a blog about all the things she’s learned about writing, publishing, and querying.  https://fairieszombiesandqueries.wordpress.com/

Are you an author who lives in/around Massachusetts and interested in being a part of the fair?  Contact Gwen Junghanss: gjunghanss@cwmars.org